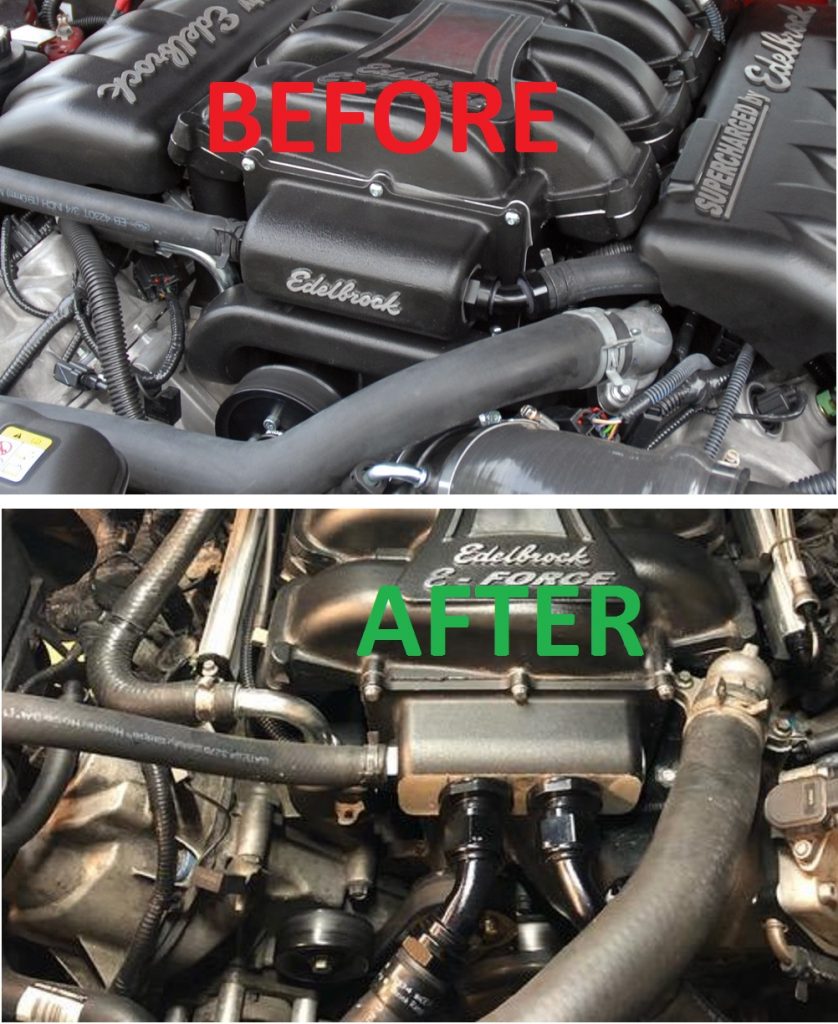 What is the hell is a Flowinator Mod you ask? Well, it’s a fun and silly name for a solution to the E-Force’s biggest problem. It’s inability to flow enough water through the intercooler to keep Intake Air Temps down. Which costs you power, lots of power.

No matter how big of a heat exchanger and water pump you throw at a E-Force it simply will not stay cool. The intercooler is a disaster in a few different ways, but mainly its ability to flow enough water. Allow me to throw some numbers your way:

At a bare minimum if you have 11psi of boost (boost = heat, more boost = more heat) you want 13-14gpm of water flow and 650cu in of heat exchanger core volume to keep IAT’s under control. The E-Force intercooler has .625” ports for the water to go through and then the water has to make a hard 90deg turn to get into/out of the IC core. If you throw the biggest and nastiest heat exchanger (our Titanic Triple), the biggest and nastiest pump (our POWA pump) and 1.25” lines (standard lines are .75”) that will only get you 16gpm of water flow. Fantastic right? That’s 2gpm more than you need. There are two problems with that solution though.

-One, you can’t get any more water speed than that. There is literally nothing out there that can be purchased or custom made that will improve water flow through the stock intercooler faster than 16gpm. If you’re making over 11psi you’re going to want more water flow. It could be argued that if you are not going to be making more than 11psi you still want more water flow. Remember, that 13-14gpm flow rate is the bare minimum, not the ideal. Without a modded intercooler you can barely keep 11psi cool and you have no room to grow.

-Two, the cost. That HE, pump and line kit costs $2625. Not exactly chump change. That’s what the best of the best costs.

In an attempt to keep costs down while maintaining good water flow and leaving room to grow we have been testing E-Force modifications. We started with an out of the box E-Force kit on a 2010 F-150 (it has the same blower and intercooler as the 2005-2010 Mustangs) and started modding it to see what we would get as far as performance goes.

The first step was to throw our Super Single Heat Exchanger (742cu in), POWA pump and 1” hose package at it ($1675). Flowing through the stock E-Force intercooler this system moves about 11.25gpm of water. This dropped IAT’s 20deg. A very solid result that you can’t duplicate with any other manufacturers heat exchangers and pumps. We make the nastiest stuff there is. Frankly, no one else is close. 20deg sounds like a great result but, the E-Force runs HOT and 20deg is not enough to keep the IAT’s cool enough to make full power for more than a few seconds when it’s warm out. It doesn’t even do a good job when its cold out.

The second step was to modify the EForce intercooler to be able to accept -20AN ORB fittings (1.25”). This is up from the stock .625” (5/8”) ports. The intercooler was machined so that the water had a straight shot at the intercooler core going in and coming out. We continued to run the 1” system that was already on it though and left the unused .25” for use later if needed. With this mod the IAT’s dropped another 15deg for a total drop with the rest of the intercooler system above of 35deg. That is a pretty big chunk! And it got the truck to what we consider a good bare minimum of cooling for your average weekend warrior at 11psi. On the upside it also has room to grow if you have more boost to deal with or want to run cooler. You can step up to our Titanic heat exchanger (1000cu in) it will drop your IAT’s another 10deg. If you run the Titanic and 1.25” lines it will control IAT’s all the way up to 18psi if used for weekend warrior stuff. Road course work is a whole different heat problem. Long story short, with the intercooler modded you have quite a way you can go before you run out of the ability to cool it. Will the intercooler mod all by itself drop your IAT’s 15deg with no other mods to your system? The answer is somewhere between “we don’t know” (we didn’t test that) and “probably not”. The water flow will increase with just the intercooler modded. But to get anything significant it takes a system approach. That means pump and heat exchanger upgrades. Why do the intercooler first? That’s easy, money. If you do the intercooler during the group buy it will save you $200 or more (see below).

That seems like an awful amount of money and effort to get to a bare minimum doesn’t it? Well, unfortunately it is, and it is what it is. The E-Force needs a lot of help just to be “not bad”. Don’t feel like it’s abnormal though, the Roush, Whipple, Kenne Bell, Saleen and Magnuson blowers all have the same issue. And most of them can’t be modded for more flow. None can be modded for as much flow as the EForce without MAJOR surgery.

During the group buy the intercooler mods, fittings and return shipping is $570 or less (more on this below). Outside of the group buy window the mods, fittings and return shipping will be $770. This will be the best $550 you will EVER SPEND on a single component in your intercooler system! And it will take you further than anything else can. Let’s take a look at the math real quick. Dropping the IAT’s with a HE, pump and 1” line kit 20deg will run you $1675. That is $83.75/deg. Dropping the IAT’s 15deg with the intercooler mod is $570 (during the group buy). That is $38.00/deg (assuming you’re running a good HE, pump, etc). It’s a no brainer. The intercooler mod is more than half the money! Additionally, if you purchase one of our heat exchangers, 1” or larger line kit and a POWA pump package during the intercooler group buy we will knock $100 out of the price of the package. Pricing info on those packages below.

This is how the group buy is going to work. It’s multi layered:

-You will read the above and say to yourself ‘I’m in!” then send us an email to departmentofboost@yahoo.com saying you’re in.

-We will send you a $50 PayPal invoice for a spot in the group buy. Spots will be limited to 100.

-We will machine the intercoolers during the month of February.

-We will invoice you through PayPal after machining is done/before they ship back to you.

-Your intercoolers will be shipped back to you with the appropriate fittings no later than March 1st 2022 (3/1/21). We’re doing the machining and we make the fittings so this will not get help up by this international supply chain disaster that is going on right now. Well, assuming we can get boxes, packing material and tape!

-You put your new stuff on your car and enjoy all of that sweet, sweet power!

Wait what? It may cost even less than $570 to get my intercooler modded? Yep, that’s right, read on…

-The pricing below represents a $100 discount.

If you want to get an entire intercooler system at the same time you’re getting your intercooler modded here are the system options, a brief description of what they will get you as far as performance goes WITH THE INTERCOOLER MOD as part of the system.

-Super Single, POWA pump, 1” line package. This package has a heat exchanger core volume of 742cu in and will flow 13gpm. This will keep IAT’s under control almost all of the time when used with a car running up to 11psi of boost. If you want to do road course driving, 1/2mi or 1mi drag events this will not be as much cooling as you want. This is by far our most popular package and works very well for most people and the way they are using their cars. Cost during the group buy is $1575.

-Titanic Triple, POWA pump, 1” line package. This package has a heat exchanger core volume of 1000cu in and will flow 13gpm. This will keep IAT’s under control almost all of the time when used with a car running up to 12-13psi of boost. The larger heat exchanger in this kit will keep things slightly cooler, it will recover faster and be more tolerant of really hot outside temps. It’s not a massive jump in performance over the Super Single at this boost level unless you run bigger lines and put more water flow to the system. If you want to do road course driving, 1/2mi or 1mi drag events this will not be as much cooling as you want. Cost during the group buy is $1965.

-Titanic Triple, POWA pump, 1.25” line package. This package has a heat exchanger core volume of 1000cu in and will flow 19gpm. This will keep IAT’s under control almost all of the time when used with a car running up to 18psi of boost. If you want to do road course driving, 1/2mi or 1mi drag events at 18psi this will not be quite as much cooling as you want. That said, it doesn’t get any better than this from anywhere. Nothing else in the industry will get close to cooling as well as this combo does. If you want to do road course driving, 1/2 or 1mi events at 11-12psi this will probably be the system you want. Cost during the group buy is $2625.

If you want to do road course driving, 1/2mi or 1mi drag events contacts us and we will help you into a system that will work for you.

Please email us with any questions to departmentofboost@yahoo.com

This website uses cookies to improve your experience while you navigate through the website. Out of these, the cookies that are categorized as necessary are stored on your browser as they are essential for the working of basic functionalities of the website. We also use third-party cookies that help us analyze and understand how you use this website. These cookies will be stored in your browser only with your consent. You also have the option to opt-out of these cookies. But opting out of some of these cookies may affect your browsing experience.
Necessary Always Enabled
Necessary cookies are absolutely essential for the website to function properly. These cookies ensure basic functionalities and security features of the website, anonymously.
Functional
Functional cookies help to perform certain functionalities like sharing the content of the website on social media platforms, collect feedbacks, and other third-party features.
Performance
Performance cookies are used to understand and analyze the key performance indexes of the website which helps in delivering a better user experience for the visitors.
Analytics
Analytical cookies are used to understand how visitors interact with the website. These cookies help provide information on metrics the number of visitors, bounce rate, traffic source, etc.
Advertisement
Advertisement cookies are used to provide visitors with relevant ads and marketing campaigns. These cookies track visitors across websites and collect information to provide customized ads.
Others
Other uncategorized cookies are those that are being analyzed and have not been classified into a category as yet.
SAVE & ACCEPT
SAVE FOR LATER
Edelbrock E-Force Intercooler Flowinator Mod Group Buy 2022