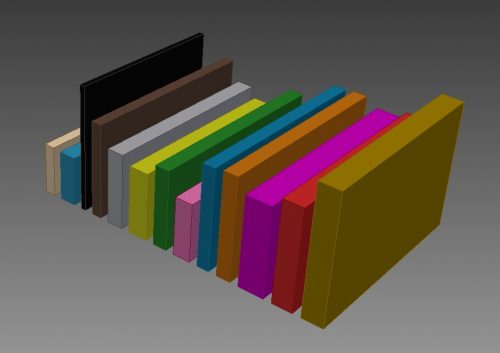 In one car alone, we had seven different heat exchanger configurations. Five in another. Three in two more cars. Some of them off the shelf units, some of them completely custom. We’ve tested up to 1500cu in of core volume.

After 10+ years of testing one thing rings true 95% of the time. The bigger the heat exchanger, the better it works. There is an argument that a bigger “face” will make up for lack of core volume a little though. If you have two 800cu in units your comparing but one has more “face”, go with that one.

As far as “passes” goes we have also not seen any evidence to suggest that more passes are better. But there are situations where more passes hurts cooling because they choke down system wide water flow/speed due to the core not being large enough to run that many passes. The results are all over the place. The short version is don’t bet the farm on how many passes a heat exchanger has. It probably doesn’t matter.

We have yet to see any truth to a small XYZ whammie jammie heat exchanger with its NASA designed space age core with XXX better heat transfer out performing a bigger unit. It’s possible that’s a thing. We find it unlikely anyone will ever do accurate testing to determine if it’s true though. The rig you would need to build to do that sort of testing would cost a fortune. And a lot of time. There is no way to accurately measure them on a car. That said, we have a window of core specifications that have worked well for us and we stay in that window. We’re certainly not saying that the core design doesn’t matter.

The hose/fitting size on a heat exchanger can make or break how much water you can flow. Almost all heat exchangers have .75” fittings. It’s very difficult if not impossible to achieve adequate water flow to control inlet air temps with fittings/ a system size that small. As a rough outline this is how much water speed changes with system-wide size change. Here are some specs based on using a Stewart E2512A water pump. Keep in mind most superchargers do not have an intercooler with bigger fittings than .625”. Some as small as .55”. So, don’t expect most systems with .75” hose to flow the .75” number below:

This is the only way we have found to measure them consistently.

Core size, side to side (width), is measured not including tanks, just the core.

Core size, top to bottom (height) is measured from the outside (top side, bottom side) of the last “tubes” open to airflow.

Core thickness is the thickness of the core minus any headers, footers, etc.

Most advertising you see for heat exchangers contains sizing based on overall dimensions. That is not the “working size” of the heat exchanger. The core size is.

Thick/Tight Cores Are A Problem:

Through testing we have learned that once cores get thicker than 2.625” they’re too thick to efficiently pass air though them. As an extreme example we have tested a 2.65” core vs a 3.125” core. The 3.125” core had half the airflow of the 2.65”. So yes, core size/volume is very important. But only if that volume is attained without making it too thick.

****There is a shortcoming with this HE that betrays its dimensions. It is very, very thick and has a very dense core, which makes it resistant to airflow. Thinner/taller units with a freer flowing core will shed more heat even if they have a lower core volume (not too low though). We rate our Super Single much better than this unit despite its smaller core volume. The Super Single will pass a lot more air through the core. And the Super Single can be run with up to a 1” line which is the only way to get stout water flow numbers.

This website uses cookies to improve your experience while you navigate through the website. Out of these, the cookies that are categorized as necessary are stored on your browser as they are essential for the working of basic functionalities of the website. We also use third-party cookies that help us analyze and understand how you use this website. These cookies will be stored in your browser only with your consent. You also have the option to opt-out of these cookies. But opting out of some of these cookies may affect your browsing experience.
Necessary Always Enabled
Necessary cookies are absolutely essential for the website to function properly. These cookies ensure basic functionalities and security features of the website, anonymously.
Functional
Functional cookies help to perform certain functionalities like sharing the content of the website on social media platforms, collect feedbacks, and other third-party features.
Performance
Performance cookies are used to understand and analyze the key performance indexes of the website which helps in delivering a better user experience for the visitors.
Analytics
Analytical cookies are used to understand how visitors interact with the website. These cookies help provide information on metrics the number of visitors, bounce rate, traffic source, etc.
Advertisement
Advertisement cookies are used to provide visitors with relevant ads and marketing campaigns. These cookies track visitors across websites and collect information to provide customized ads.
Others
Other uncategorized cookies are those that are being analyzed and have not been classified into a category as yet.
SAVE & ACCEPT
SAVE FOR LATER
Heat Exchanger Size-Tech Information S550